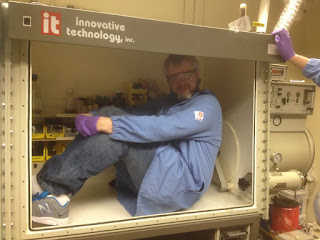 I started as an assistant professor at Dalhousie University in July 2015, and was granted promotion to associate professor and tenure in 2020. I was born and raised in Liverpool Nova Scotia, which is a small town approximately 110 km southwest of Halifax. I was educated in the public school system of Liverpool, and I have been broadly interested in the sciences for as long as I can remember. I first remember being interested in chemistry when my grandmother would make different coloured solutions of kitchen products to entertain me. My mother is a watercolourist, who had lots of interesting pigments, and introduced me to red cabbage based pH indicators, and the art of making giant bubbles with glycerine and soap.

My childhood had some avid chemical experimentation, enabled by both real commercial chemistry sets (sadly no longer available due to our litigious society), and the pharmacy (in the 90s you could freely buy such things as potassium nitrate, oxalic acid, sulfur, iodine, and magnesium sulfate). I maintained strong interests in physics and biochemistry as well, making it as far as a silver medalist in Canada's National Science Fair (Edmonton 1999) with a project in biophysics (investigating the effects of EM radiation, such as that produced by electrical transformers, on the growth of brine shrimp). I was amused upon visiting the University of Alberta 20 years later as a visiting speaker to learn that some of the chemistry faculty may have judged my project! I decided to focus on chemistry when I had to declare majors as an undergraduate,  earning my BSc at Dalhousie University in 2006. Despite my current interest in main group catalysis and methods development, almost the entirety of my training from undergraduate through to PDF was conducted in total synthesis. I was introduced to research, mechanistic thought, and organic chemistry in summer research with Prof. James A. Pincock in 2003, preparing indenyl acetates for photochemical studies. I learned the basics of photochemical excitation, and chemical kinetics (far before photochemistry enjoyed its current renaissance). I conducted an honours project and two summers of research with Prof. D. Jean Burnell, learning synthetic technique by helping a graduate student Craig Stamp scale up intermediates for the synthesis of fredericamycin A, then conducting my own projects, first using a carbohydrate derivative as a chiral controller, and then developing an interest in organometallic chemistry by investigating the diastereoselectivity of cross-metathesis dimerizations of chiral but racemic substrates. Dr. Burnell counselled me at the time that organometallic chemistry and enzymatic chemistry would be two of the most prominent future branches of synthetic chemistry.

My undergraduate studies were followed by PhD studies at Harvard University, in Cambridge Massachusetts, which is 550 km southwest of Liverpool NS. Keeping in mind the promise of organometallic chemistry, I first embarked in organoiron chemistry. This is a challenging field, due to the difficulty of characterizing many of the intermediates by NMR spectroscopy. After a year in the group of Prof. Tobias Ritter working with low-valent iron complexes, I completed my PhD in the group of Prof. David A. Evans,  graduating in 2012. During my time in the Evans group, I completed a synthesis of peloruside A, and synthesized a compound en-route to spiro-prorocentrimine containing all 16 stereocentres, solving a complex stereochemical problem in a Diels-Alder reaction on the way. I had a lot of latitude in applying my interest in organometallic chemistry to this synthesis. Working on spiro-prorocentrimine also introduced me to imines, and homogenous hydrogenation of alkenes employing rhodium and iridium catalysis. As you might be able to tell from the structure of the frontier intermediate, an olefin metathesis to close the 23 membered ring was not successful for conformational reasons that we did not predict at the beginning of the project. Perhaps a few months of learning conformational analysis using DFT might have saved a few years in the lab. However, it was a project of a level of complexity that few have had experience in. Regardless of one's success in completing a synthesis, total synthesis can teach a lot by the sheer complexity of the targets, and the diversity of the techniques it take one to reach (or attempt to reach) such a target.

After graduating from Harvard, I made my smallest geographical move yet,  travelling 7 km southwest to Boston College where I worked for Prof. Amir Hoveyda to expand my exposure to methods development, catalyst design, and learn about the intricacies of Z selective olefin metathesis. During my time in the Hoveyda group, I was finally able to complete a total synthesis using olefin metathesis. I completed a synthesis of disorazole C1, working with molybdenum-based olefin metathesis catalysts to synthesize an advanced intermediate for a challenging Suzuki dimerization. I also learned how to disassemble, reassemble, and maintain a glovebox, which proved most vital in my subsequent career!

After 9 years in the Boston area, by an amazing coincidence in the academic hiring cycles I was very fortunate to have the opportunity to return to Nova Scotia, and Dalhousie University. Departing from my background in total synthesis and organometallic catalysis, I established a research program in main-group catalysis, and am happy to be able to conduct research and teaching in the Chemistry department with many talented students, colleagues, and collaborators. Learning from my days as an iron chemist, I decided to work with nuclei that are highly amenable to NMR analysis. When I'm not in the lab, you might find me pursuing my passions for history, horticulture, camping, hiking, or enjoying Nova Scotia's excellent seafood offerings. I enjoy sleeping outside in temperatures far below what most people would find palatable.