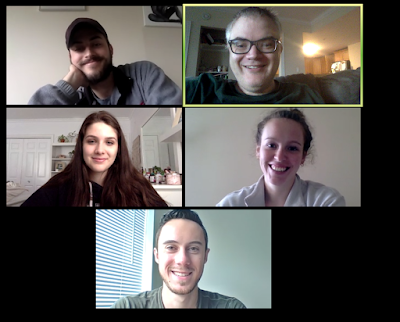 Adam Beckett 2018–present
MSc Student
Adam is from New Brunswick, and completed his BSc at Mount Allison University, working in the Briand group. Adam is an MSc student in the Speed group studying some applications of diazaphospholenes, and the synthesis of diazaphospholenes that are not accessible through existing technologies. Adam is currently part of the Bioactives CREATE program.

Blake Huchenski 2015–present
PhD Student
Blake is from Sudbury Ontario/Dartmouth Nova Scotia, and graduated with a BSc from Dalhousie University in 2015. He was a research associate in the Speed group for a year before continuing in the Speed group as an MSc student. Blake developed the first examples of BAC carbene borane adducts. Blake transferred into the PhD program in 2018 as the Speed Group's first PhD student, continuing development of new types of BAC complex.
Robert Riley 2020-present
MSc Student
Rob is from Cherrybrook in Nova Scotia, and did his honours BSc at Saint Mary's University. He worked in the Clyburne lab working on catenated bismuth compounds. Rob started his MSc in the Speed group in 2020, working on the use of diazaphospholenes in radical chemistry. Rob is currently part of the Bioactives CREATE program.

Erin Welsh 2017–present
PhD Student
Erin is from Goose Bay in Labrador, and spent her summer and honours project working on the synthesis of new types of chiral amines for chiral ligand synthesis. Erin continued in the Speed group as an MSc student studying the synthesis of bulky chiral amines, which will lead to diazaphospholene and carbene catalysts with improved selectivity over existing technologies. Erin transferred into the PhD program in 2020 as the Speed Group's second PhD student. Erin is currently part of the Bioactives CREATE program. 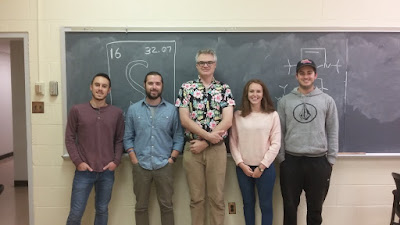 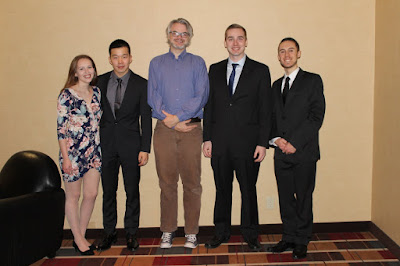 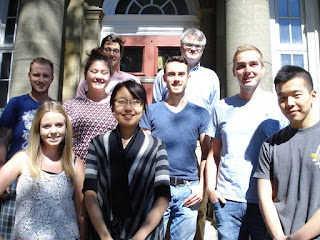 Matt Adams 2015–2018
BSc and MSc Graduate
Matt is from the South Shore of Nova Scotia, and completed his fourth year undergraduate honours project in the Speed group in 2015–2016, developing diazaphospholene precatalysts, and showing their use in imine reductions and conjugate reductions. Matt continued in the Speed group as an MSc student, and developed the first examples of asymmetric reductions using chiral diazaphospholenes. After defending his MSc in March 2018 Matt moved to Montreal to work at IntelliSyn RD.

Jessica Bosso 2020
ICE Exchange student
Jessica is an undergraduate at the University of Western Ontario, and was a participant in the Inorganic Chemistry Exchange (ICE) Program. While the pre-COVID plan was for her to spend the summer in Halifax working on new diazaphospholene architectures, she instead learned the basics of computational chemistry to help rationalize some aspects of diazaphospholene selectivity and explore new catalysts in-silico.
Emily Burke 2019
BSc Student
Emily was a summer student in the Speed group, developing routes for the synthesis of some exciting polyaromatic heterocycles with well-defined substitution patterns that are difficult to access through direct reactions on the parent heterocycles. While Emily won an award to return in the summer of 2020, the COVID shutdown threw a wrench in those plans.

Michael Charlton 2016–2017
BSc Student
Michael was a summer volunteer in the Speed group, fittingly examining the chemistry of Michael acceptors. Michael stayed on in the Speed group for a fourth year undergraduate honours project, and studied halogenation and haloalkylation reactions. Michael continued at Dalhousie, in the MSc program in the Obrovac group.

Cheyenne Christopherson 2016–2017
BSc Student
Cheyenne was an experiential learning student in her third year of undergraduate studies. Cheyenne stayed on in the Speed group for a fourth year undergraduate honours project, and studied the addition of carbenes to boron centres containing fluorinated or sp2 hybridized ligands. After her graduation, Cheyenne entered the PhD program at the University of British Columbia, working in the Hudson group.

Alex Gatien 2016–2018
Joint MSc Student
Alex is from the west coast of Canada, and obtained his BSc from UBC. He was a joint student working with the Stradiotto group and our group. Alex engaged in a collaborative project between our two groups developing ligands for nickel catalyzed cross-coupling based on the diazaphospholene scaffold. After graduation, Alex moved to Montreal to begin a position at Paraza Pharma.

Kristen Giffen 2016–2017
BSc Student
Kristen studied activation of phosphorus-phosphorus bonds with diboranes with the goal of developing catalytic borylation reactions for her fourth year undergraduate honours project. She also studied the catalytic cleavage of phosphorus carbon bonds. After graduating Kristen entered the pharmacy program at the University of Toronto.

Shay Heans 2019
BSc Student
Shay was an experiential student in the fall of 2019. She worked on streamlined syntheses of diimines from sensitive amines, and synthesized test substrates for a new class of SN1 reactions.

Dianne Lee 2016–2017
BSc Student
Dianne studied the use of chiral counterions for borenium cation catalysis for her fourth year undergraduate honours project. After her graduation, Dianne entered graduate studies in the Crudden group at Queen's University.

Travis Lundrigan 2018–2020
Postdoctoral Associate
Travis is from northern Nova Scotia, and obtained a PhD at Dalhousie University in 2017, working in the Thompson group on boron and pyrrole chemistry. In the Speed group Travis studied asymmetric reactions with phosphenium cations that primarily target substrates rich in sulfur or nitrogen that poison traditional transition-metal reduction catalysts. After finishing his post-doctoral position, Travis began a second post-doctoral position 1 glovebox over in the Stadiotto lab.

John Robinson 2018
BSc Student
John was a summer student who worked on applications of diazaphospholene catalysis to total synthesis of bioactive molecules as part of the Bioactives CREATE program.

Olexiy (Alex) Rusalovs'ky 2015
BSc Student
Alex was a visiting summer student from the University of Ottawa, who studied the synthesis of modified Grignard reagents by manipulating Schlenk equilibria of pseudohalide salts during a summer research project. After his graduation from UOttawa, Alex entered the pharmacy program at Dalhousie University.

Chieh Hung Tien 2015–2018
BSc and MSc Graduate
Tien is from Taiwan, and completed his fourth year undergraduate honours project in the Speed research group in 2015–2016 studying catalysis of magnesium insertion into "impossible" substrates. Tien continued in the Speed group as an MSc student, both making contributions to our diazaphospholene chemistry, and pioneering the development of triazaphospholenes, including the first examples of phosphenium catalyzed imine hydroboration. Tien defended his MSc in March 2018, and moved to the University of Toronto to pursue a PhD in the Yudin Group.


Scott Young 2019
BSc Student
Scott was an experiential learning student in the Speed group during the summer of 2019. Scott synthesized conjugate acceptors, a boronic acid, and an imine. Scott continued at Dalhousie as a member of the Obrovac group.