Catalysts are chemical entities that accelerate or change the course of chemical reactions. Catalysts based on transition metals have especially revolutionized the synthesis of both bulk and fine chemicals. Fine chemicals encompass such classes of molecules as the medicines that underly the modern healthcare system, and various materials that are involved in the manufacture of modern electronics. Without the contribution of catalysis, neither of these fields would exist in a recognizable form. The primary research focus of our group is to develop highly efficient catalysts and reagents that do not contain transition metals, that exhibit complementary or superior reactivity to transition metal-based catalysts. 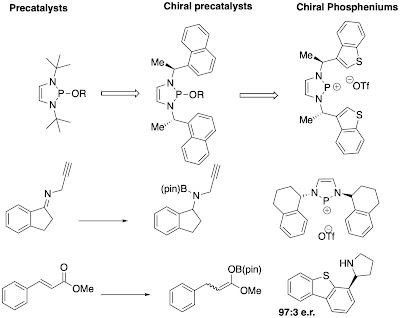 The Speed group has made a number of developments in the chemistry of diazaphospholenes, including the first report of diazaphospholene-catalyzed imine reductions and catalyzed conjugate reductions. We subsequently made the first disclosure of an asymmetric reaction catalyzed by diazaphospholenes. Although obtained enantiomer ratios were modest (not exceeding 90:10), we continued to develop catalysts with improved performance. We have most recently reported chiral phosphenium catalysts that can obtain enantiomer ratios in imine hydroboration of up to 97:3.

Efforts are ongoing to develop catalysts with even higher enantioselectivity and efficency, especially ones that can carry out transformations that are infeasible with existing metal-based catalysts. Diazaphospholenes are notably resistant to poisoning by Lewis-bases, enabling the reduction of compounds containing pyridines, free amines, and sulfides, that frequently interfere with transition metal-based catalysts. Mechanistic studies and development of air and water-stable catalyst systems based on diazaphospholenes are also in progress.

In a separate branch of our program, we disclosed some of the first examples of BAC carbene-boron adducts, and found that they had unusual selectivity in hydrogenation reactions. We subsequently published a study showing the unusual selectivity was the result of an interplay between the relatively large cyclohexyl groups, and relatively small BAC carbene. While these results were intriguing, developments led this project to non-hydrogenative applications, which will be reported in due course.

We have a number of other projects underway that will be reported as they progress. While understandably we will not disclose too many details prior to publication, these projects involve completely different chemistries to those described above, involving activating common gasses using photochemistry. As a teaser, consider the difficulty of functionalizing polycyclic aromatic hydrocarbons in particular positions. PAH compounds have many uses in molecular electronics, and regiochemical functionalization changes resulting material morphology and function. Catalytic control of regiochemistry in functionalization will be extremely useful. 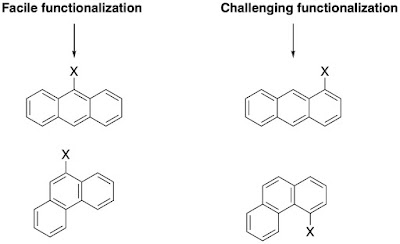 Techniques:
We employ Schlenk and glovebox techniques to manipulate many reactive main group fragments in exploratory work to discover new chemical reactions. A significant portion of our work involves the design of precursor compounds which tame the reactivity of the active catalyst so that they can be handled in the air using standard chemistry lab technique.

We study reactions that have application toward the synthesis of molecules of interest to medicine and materials science. We target reactions of broad scope, and are especially interested in transformations that are not accessible in one step with current technology. Current transformations under investigation include asymmetric hydrogenation, hydration, hydroamination and aminoboration reactions.